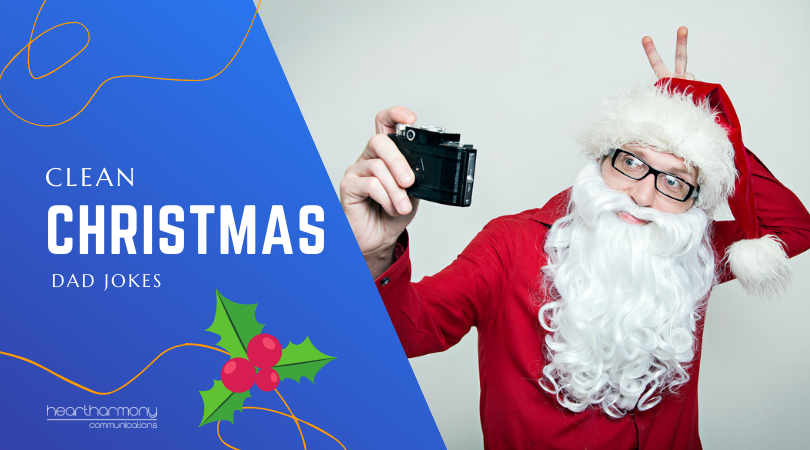 A stack of groan-worthy Christmas Dad jokes for your work Christmas party, family gathering or to use in bon-bons.

It’s that time of year when dads and lovers of bad jokes everywhere dust off their worst Christmas dad jokes to share with unsuspecting kids and colleagues (or write them in your office Christmas cards when you are stuck for something to say).

In the interests of saving you some time finding your own to share, here’s a few of my favourite Christmas “Dad” jokes.

Why didn’t people like the new Apple Mac themed advent calendars?
They didn’t have any Windows

Someone stole my Secret Santa present. It was a copy of Microsoft Office.

I will find you. You have my Word.

My math teacher said my Christmas present was average.

What do you call Santa living at the South Pole?

How does Santa Claus take a picture?

What do you call the wrapping paper leftover from opening presents?

How does Santa keep track of all the fireplaces he’s visited?

Why are Santa’s deers always wet?

Which of Santa’s reindeers has the worst manners?
Rude-olph

What do reindeer hang on their Christmas trees?
“Horn”-aments

What do elves sing to Santa?
Freeze a Jolly Good Fellow

How does Darth Vader like his Christmas turkey?
On the dark side

How do we know what Father Christmas has for dinner?
He posts it on InSantagram

How does Darth Vader know what you are getting for Christmas?
He can feel your presents

Who saved Santa the job of creating a naughty list?
Ashley Madison

Where does Santa work out?
Down the gymney

What kind of motorcycle does Santa ride?
A “Holly” Davidson

What do you call a smelly Santa?
Farter Christmas

What does Rudolph want for Christmas?
A pony sleigh station

Whats happens if you eat the Christmas decorations ?
You get tinsel-itus

How does Good King Wenceslas like his pizzas?
Deep pan, crisp and even

How did Mary and Joseph know that Jesus weighed 3.34kg when he was born?
They had a weigh in the manger

One time Father Christmas lost his underpants.
That’s how he got the name Saint Knickerless

Where does Santa stay when he’s on holidays in January?
At a Ho-ho-tel

Where does Santa go to learn to slide down a chimney?
Chimnesium

Why does Santa wear pink underwear?
He did all his washing in the one load

What did the dog get for Christmas?
A mobile bone

What did the farmer get for Christmas?
A cow-culator

What do you get if you get a bunch of chess players boasting about their games in a hotel lobby?
Chess nuts boasting in an open foyer

What hides in the bakery at Christmas?
A mince spy

Why did no-one bid for Rudolph or Blitzen on eBay?
They were too deer

What do Santa’s little helpers learn at school?
The elf-abet

Why is it getting harder to buy Advent Calendars?
Because their days are numbered

What does Santa suffer from if he gets stuck in the chimney?
Claustrophobia

Why did Santa’s helper see a psychologist?
Because he had low elf esteem

What do you get if you cross Santa with a duck?
A Christmas quacker

What is the best Christmas present in the world?
A broken drum. You just can’t beat it

How many letters in the Christmas alphabet?
25, There is no L

What do you call Santa’s little helpers?
Subordinate clauses

What do the elves call it when Santa claps his hands at the end of a performance?
Santapplause

What did Santa say to Mrs Claus when he saw the thunderstorm?
Looks like rain-deer.

What do you give the person who has everything?
Antibiotics

* Two snowmen in a field, one turned to the other and said “I don’t know about you but I can smell carrots.”

* Xmas is the time when people put up so many light bulbs outside you don’t know if they’re celebrating the birth of Jesus or the electricity company.

* There has to be something wrong with Santa. Can you imagine any other bloke doing all that driving and still saying ho ho ho at the end?

* The jumper I got for Christmas kept picking up static electricity, so I took it back and exchanged it for another one. Free of charge!

* I have this weird talent where I can tell what’s inside a wrapped present. It’s a gift.

* I once watched Santa doing stand up comedy. He was sleighing them!

If you would like some great stories behind the modern celebration of Christmas, check out the stories behind Scrooge and Rudolph in our post on How Copywriters Saved Christmas.