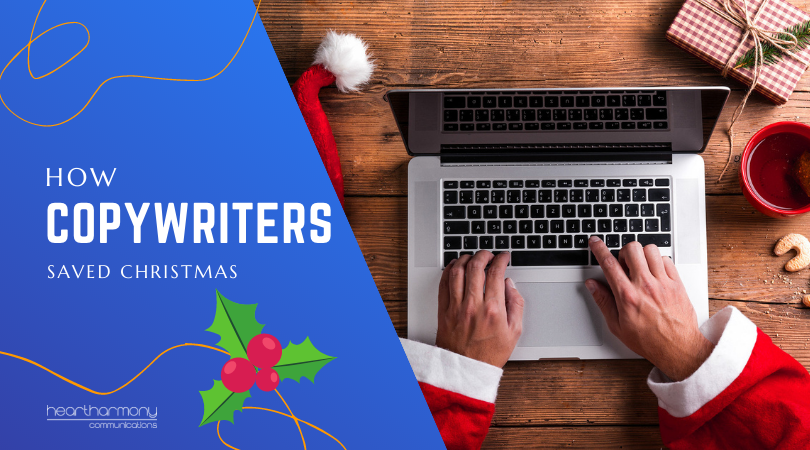 Marketing often gets a bad reputation, but there are times when the right words at the right time transform society. Christmas and copywriters go together, which is why we decided to share the back story of two of the true legends of copywriting.

Did you know that the celebration of Christmas as we know it had been banned by the Puritans in the 1700s and had almost died out in the early 1800s?

People thought Christmas was a disreputable, old-fashioned custom and didn’t celebrate it in as much the same way that they studiously avoided celebrating other smaller Biblical days such as Epiphany and Pentecost, unless they belonged to a particular branch of the church.

That is a struggling freelance copywriter by the name of Charles Dickens wrote A Christmas Carol.

Dickens was so poor, that the story goes that he once tried marketing his services by writing his name and contact details on the legs of local ladies of the night that worked in his area.

Dickens was a very fast writer and wrote A Christmas Carol in less than two months as yet a way to try and make money, as he was nearly bankrupt from his failed novel Martin Chuzzlewit.

A Christmas Carol was published on 19 December 1843 and the first run of 6000 copies sold out in one week at the very high price of 5 shillings a copy.

The book was so popular that Dickens was asked to read from it to audiences around the world, which gave him the honour of having one of the first major successful speakers tours. Dickens ended up making as much from speaking as he did from writing the book – a business model that hold true for many speakers today.

A Christmas Carol is credited reviving our celebration of Christmas, and the characters of Scrooge and Tiny Tim have entered Western folklore.

Dickens is also the person to thank for popularising the term “Merry Christmas” – a term that came to epitomise the essence of the Christmas celebration, and to make greeting card manufacturers a stack of money (and became the standby of what to write in office Christmas cards when you were stuck for words).

If you are looking for more Christmas themed words, check out our groan-worthy Christmas Dad Jokes.

But that’s not all!

Another copywriter, Robert L. May, was asked to come up with a Christmas story to give away to shoppers at Montgomery Ward department store in Chicago in 1939.

Robert based his story of Rudolph the Reindeer on the Ugly Duckling and tried the names of Rollo and Reginald for the reindeer before settling on the name Rudolph.

He wrote the story in rhyme and tested it on his daughter to see if the story worked. She was delighted, so May presented the story to his boss and waited with trepidation for feedback.

The feedback came, and in a fit of political correctness, May’s boss worried that the red nose may not be appropriate for a family store – after all red noses were associated with alcoholism and drunks. He wanted to bin the story and have May start again.

Like most good copywriters who believe in their work, May hatched a last-ditch attempt to win his boss over and save the story of Rudolph.

May had his friend Denver Gillen sketch some reindeer from the local zoo with red noses.  These drawings finally won over the boss and the book went to print … and reprint and reprint.

Over 2.4 million books were handed out by the end of 1939 thanks to word-of-mouth viral marketing.

As the work had been created while May was an employee of Montgomery Ward, they owned the copyright and he received nothing for his work.

With his wife suffering terminal cancer and deeply in debt, May finally convinced the store to turn the copyright over to him in January 1947.

His financial future was then assured as he carefully managed the intellectual property in Rudolph through his company the Rudolph Company L.P.

May’s brother-in-law, singer Johnny Marks, took the poem and turned it into a song which was recorded by Gene Autry after many people turned the song down as not being commercial enough. The song is now the second song of all time, second only to “White Christmas“.

Have a wonderful, safe and fun-filled Christmas – and whenever you hear A Christmas Carol or Rudolph the Red Nosed Reindeer, think of the difference the right words at the right time written by a brilliant copywriter (cough – you can call us, we are superb with words) can make to your business and your life.

Like this backstory? Check out the backstory to the guy who invented the shopping trolley – one of the world’s true geniuses.